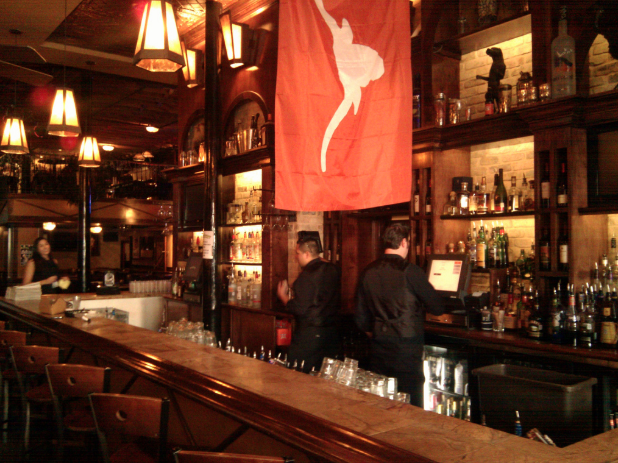 If you are tired of the normal bar scene and want to try something different, a Las Vegas speakeasy, such as The Barbershop, may be just what you are looking for. Like any bar, these places serve up all your favorite cocktails, craft beers, and mixed drinks. But, they have a special twist that makes them reminiscent of the illegal drinking establishments that popped up during the Prohibition era. While these modern-day speakeasies are completely legal, they provide a unique way of experiencing the past. But what exactly is a speakeasy? Keep reading to find the answers to five common questions.

Let’s start with the basics.  The name “speakeasy” may sound familiar to you. However, you may not fully understand the concept. That’s okay! Let us explain.

During the Prohibition era, which lasted from around 1920 through 1933, it was illegal to manufacture and sell alcohol in the United States. Alcohol was prohibited across the nation, hence the name, “prohibition.” That didn’t stop folks from enjoying their favorite alcoholic drinks, though. While many bars and taverns closed down, illegal drinking establishments known as “speakeasies” cropped up all across the country.

Genuine speakeasies disappeared after the end of Prohibition. The concept, however, has remained an interesting one. Modern-day speakeasies are legal establishments where guests can have the experience of living during the Prohibition era.

2. Where Did the Name Come From?

In the early 1820s, the British used the phrase “speak softly shop” to describe the home of a smuggler. This phrase eventually changed to, “speakeasy shop.” People used this terminology to describe places where alcohol was sold to the public illegally. Since these places did not want to attract attention – especially that of local law enforcement officers – the idea was that customers needed to keep the noise down, or “speakeasy.”

In time, the phrase was shorted to “speakeasy” and was used in the United States to describe unlicensed saloons in the late 1800s. During the Prohibition era, the phrase became a common way of describing illegal bars.

3. What Is a Modern-Day Speakeasy?

With the end of Prohibition nearly a century past, there is no need for bars where patrons can purchase illegal alcoholic beverages. Today, anyone over the age of 21 can walk into any bar and order all sorts of tastebud-tantalizing concoctions.

Still, though, the allure of the speakeasy has remained. Though it was highly illegal, it was extremely popular. Many associated speakeasies with organized crime because illegal liquor was often manufactured and transported by shady characters. Yet somehow, it brought people together in all sorts of unexpected ways.

People of all ages, genders, social classes, and races met and mingled in speakeasies. The appeal of enjoying a bit of harmless lawlessness has lived on for decades.

Today, modern speakeasies are popping up across the country in major cities. Spots such as The Barbershop strive to create the same atmosphere. They tuck themselves away behind secretive and elusive entrances, like an unassuming janitor door. When you step inside, you are transported into a 1920s-inspired establishment like no other.

In the past many of the speakeasies were hidden behind false fronts. They may have looked like one business from the outside. But on the inside, they were serving up illegal beverages. If you visit The Barbershop, you’ll step inside a 1920s barbershop that is more than just a front. At this modern take on the classic speakeasy, you actually can enjoy a straight razor shave and a cut from a leading barber while sipping on your favorite beverage.

4. What Are Some Classic Cocktails?

When you visit a modern speakeasy, you can enjoy just about any type of alcoholic beverage you prefer. Whether you are in the mood for craft beer, whiskey, or a decadently sweet cocktail, it’s probably on the menu. There are, however, some classic cocktails you need to try if you want to get the full speakeasy experience.

During Prohibition, the quality of alcohol wasn’t always the greatest. Since distillers had to manufacture it on the sly, evading authorities took precedence over taste. Bartenders, however, masked the taste by combing it with a range of mixers.

If you’ve ever sipped on a Brandy Alexander, you’ve experienced a classic Prohibition-era cocktail. This drink includes cognac, crème de cacao, cream, and nutmeg. The cream and nutmeg soften the harsh flavor of the liquor. Today, these drinks use high-quality liquors. It makes them much more enjoyable than the ones your great-grandparents may have drunk!

5. How Do You Find a Modern Speakeasy?

During Prohibition, you had to know someone willing to share the location if you wanted to visit a speakeasy. Thanks to the internet, though, they are much easier to find now. If you want to find a speakeasy in your city, go to Google first. A quick search will likely yield several results. If you’re lucky, you’ll find information on exactly how to find the secret entrance to gain entry.

If you want to visit a truly secret spot, though, you may still need to rely on word of mouth. Make friends with the locals and ask about the best-hidden gems. You could find yourself ducking down an alley that leads you into a retro drinking establishment where you can escape from the modern world for a little while.

Stepping into a modern speakeasy transports you through time and American history. If you have already experienced what your city has to offer, check out the top rated speakeasies across the globe. No two speakeasies are ever the same. Each one perpetuates the air of mystery surrounding the era of Prohibition with a blend of unique cocktails and ambience. You can choose your favorites or make it a cross-country tour for your next vacation. If you have a taste for strong drinks and classic Americana, this is one experience you don’t want to miss.